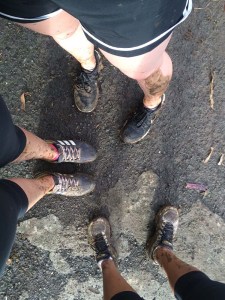 This mud was earned.

When the hash was first brought up, my immediate response was, “no, that’s not my scene. I don’t do the drugs,” which I imagine is a pretty normal reaction for hashing initiates.

It was January 10, 2015, I was visiting my friend, Alyssa, in Grenada, and I was about to embark on one of the best hiking adventures of my life. Not just any adventure, but the one that sparked my current obsession with hiking.

I met Alyssa in graduate school. She was born and raised in Grenada, and a couple years ago she left D.C. to go back home. As anyone who’s spent time with Alyssa knows, it’s impossible to have a real conversation with her and not to learn something about her home country. She’s like a one-woman tourism ambassador. Through her, I learned all about Grenadian companies, industries, geography, economics, politics…the works. With all my knowledge and years (!) of friendship, I was long past due for a visit. My friends Sireen and Ashwini were also well overdue, so we all hopped on a plane and spent the beginning of the year with Alyssa and her family.

Having the opportunity to see the things I’d heard about from Alyssa first-hand was
such a special experience. I could probably go on and on and on for pages about everything that we did during our week in Grenada, but this is a hiking blog. So let’s focus on the important thing: the hash.

What is a hash? As it was explained to us, the hare (aka trail setter) sets a trail of shredded paper along a route they pick. This trail can also include tricky false leads. Runners and walkers follow the trail with no idea where it will take them or what obstacles lie ahead. They follow the trail until they reach the end where a party with beer and delicious food is waiting. Our hash was run by the Grenada Hash House Harriers, a group that’s been planning hashes since 1985. That’s 30 years of awesome hashing! 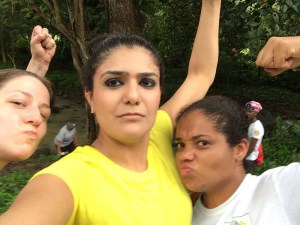 Free ticket to the gun show.

Sounds fun, right? Well, I kind of didn’t want to do it. It had been raining a lot, and I was just sure that we’d end up being wet and miserable. But Alyssa was very convincing that this was a thing we wanted to do on our visit, and Ashwini was really excited about participating so, like a good sport, I agreed.

When we arrived at Beausejour Playing Field in St. George’s, I still felt unsure. It kind of reminded me of the feeling you get when you’re starting a new school. All the older students know what’s going on, and you’re this helpless kid standing around awkwardly trying to figure out how to get to class. Thankfully, we had Alyssa as our guide. She’d done this before and knew how to prevent us from getting too lost or confused.

Before “On On” at 3:30 pm, we had a group briefing where the Hash Master explained the rules and introduced us to the day’s hare, Cereal Killer. There was also this great ritual where people wearing new shoes had to drink Carib beer out of them. Nasty. Thankfully, Alyssa warned us about this gross tradition in advance, so we all were wearing appropriately old shoes.

…and then we were off on Grenada Hash House Harrier’s Hash #861!

We started out heading toward the Beausejour Estate, which is a huge white manor house located at the top of a giant hill. And when I say giant hill, I mean baby mountain. This thing was huge and surprisingly steep, and the weather wasn’t helping. It was that kind of sticky hot that builds up between rain storms, the kind of air that turns people into sweat monsters. 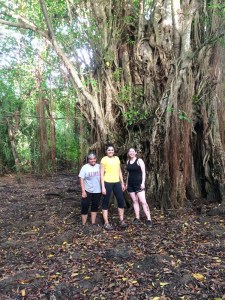 This is one of the largest trees I’ve ever seen,

My personal belief is that you should always go your own pace when engaging in strenuous exercise. I learned this the hard way by injuring myself going slower than my natural pace with a past exercise partner. It’s not a mistake I plan to make again, so I hauled myself up that hill. I was the first of my friends to make it to the house, so I was able to pause, catch my breath, and take in the amazing view from the top.

The next leg was downhill. Normally, this wouldn’t have been too bad, but, as I already mentioned, it had been raining. A lot. At this point, the ground was oversaturated. Factor in all the hashers who were ahead of us, and we were left with a slippery mess.

There was a nice older woman who lent me her walking stick to get around some of the trickier parts. If it wasn’t for her, I would have rolled down the hill. Even with her help, I still ended up falling and sliding on my bottom for the last few feet. This wouldn’t have been so bad, but there were some ants hanging out in the dirt who weren’t very happy with me disturbing their home. As a punishment, I received a few bites while I tried to regain my footing.

When I reached the bottom, I realized one very frustrating fact – we were right back where we started! If we’d known in advance, we could have just skipped the uphill altogether and we wouldn’t have missed anything except the view.

As frustrating as I found that trick, it also got to the heart of what I liked about the hash. In contrast to the way I hike now, where I plan and obsess over every detail, we spent very little time thinking about the actual route. We were following someone else’s path, trying to uncover and stay on someone else’s trail. There was a fun underlying element of unpredictability and detective work as we followed the hare’s plan for our journey.

After the monster-sized baby mountain, a large group of us headed into the bush. I’ve written before about trail friends, but I felt like the bond between us hashers was extra strong. Some of our fellow hashers were Alyssa’s real-life friends who we ran into on the trail (apparently, hashing is popular Saturday fun), but in general, people were just much friendlier than I’m used to experiencing. 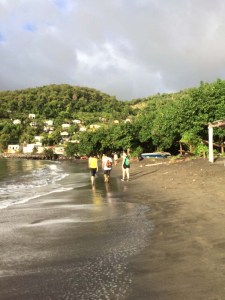 Finding some peace on the beach.

Maybe it was the fact that everyone around us was also a hasher. We were all trying to figure out the same puzzle – equal parts frustrated and intrigued. Then again, maybe Grenadians are just super friendly. It is a small country – you have to be extra careful not to accidentally insult someone’s auntie.

Once we got to the bush, I thought maybe we were in for smooth sailing for the rest of the hash. I jinxed myself because shortly after we hit our next major obstacle, a river. There was no way to easily go around it, we had to ford it.

There is only one thing nastier than going through muddy water in sneakers, and that’s spending the rest of the day walking around in the wet sneakers. As an added bonus, the wet shoes created an additional element of danger as we continued to travel through mud for the rest of the hash.

After we left the river, we climbed up more hills and through some backyards. At first, I felt very uncomfortable. This wasn’t my country, what right did I have to bring my muddy self into other people’s yards? Heck, that’s something I couldn’t imagine doing in this country! But the people whose homes we passed were really friendly and were quick to point us in the right direction.

We alternated between trudging through the bush and climbing through residential areas. We passed farm animals and some of the biggest trees I’ve ever seen. It felt like we trekked through the entire island, but according to Alyssa we spent our whole time within the Village of Beausejour.

The highlight of our journey came toward the end. After tromping through the woods for what felt like ages, we were nearly spent. Almost without warning, we emerged from the bush onto Beausejour Beach. It was a thin strip of beach, much less crowded than some of the country’s other beaches, and was such a relief to take a moment to look out at the water and feel the ocean breeze. That simple moment made everything – all the blood, sweat, and tears – worth it. 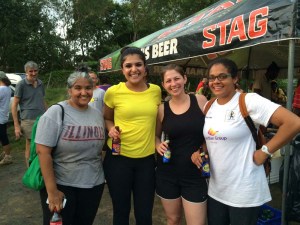 Enjoying beer and soda at the finish.

We were one of the last groups to get back to the starting point, and by the time we arrived the post-hash party was in full swing. People were enjoying the local beers, Carib and Stag, and eating some great looking dishes. Most of the food was already sold out, but I was able to score a delicious bowl of lambie (conch) soup. Nom.

Once everyone was back at the field, the Hash Master gathered all the “Hash Virgins” together for a special virginity losing ceremony. Afterward, Ashwini, Sireen, and I received special certificates certifying our awesomeness (clearly, a prized possession). 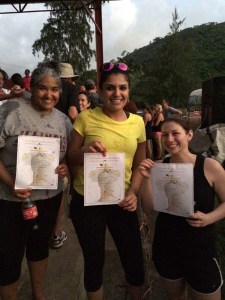 We earned these certificates!

This was an unforgettable experience. At one time, the Grenada Hash House Harriers only had one hash a month, but it was so fun, I can see why they started holding them bi-weekly. If I lived in the country, I would probably be a semi-regular, and if I make it back for another visit, doing a hash would definitely be on my list.

A couple months ago, Sireen and I discovered that hashes aren’t just a Grenada thing, they exist around the world. We found a few local hash groups, and we’ve talked about trying on out. It’s still just talk, but maybe we’ll act on it soon?

Want to see more of Hash #861? Check out this video from the runners’ trail: