Anyone who has spent time with me knows that I like to talk about the weather.

Hang around long enough; you’re going to get a full weather report. Most of the time it’s just an acknowledgment that it’s too hot or cold outside. Sometimes it’s the exact start time of a forecasted storm. And other times it’s more along the lines of, “there’s a freak snowstorm coming, and the world’s going to end.” (Weather also makes me overdramatic)

If you’ve listened to me complain about the temperature, you might think I hate seasonal changes. It’s a fair assumption. I’ve been very open about the fact that harsh winters were a major factor in my decision to leave Massachusetts. And I’ve been known to wax poetic about the winters of my childhood, where the thermostat only occasionally dipped below a crisp 50 degrees.

But honestly, I love seasons. I love the way they mark the passage of time. I love how cold winters give me an excuse to drink hot chocolate and hide under the covers, and I love how hot summers give me a reason to sip sangria and stay out until 10 pm on a work night.

And fall? Fall is the best season of all. 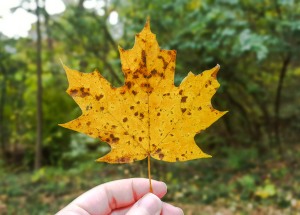 Growing up, all the good things seemed to happen in the fall. Autumn marked the end of the brutal Florida summer. It meant two of my favorite holidays – Halloween and Thanksgiving – were right around the corner. And it signaled the beginning of wearing orange and blue as another Gator football season got underway.

Fall got even better when I left Florida. The season expanded to include apple picking, changing leaves, apple cider donuts, hot drinks in front of fires, hearty foods, and, of course, that refreshing, crisp feeling as cold crept into the air.

This year, fall has felt incredibly slow to start. Even though the days have continued to march by, the weather hasn’t cooperated.

Like a lot of the world, DC has been experiencing extended periods of unseasonable warmth. I’m not great at understanding the science behind the weather, but the Capital Weather Gang just published an interesting article explaining our record warm streak.

There was so much heat that most of the month didn’t even feel like October. Then, suddenly, the weather changed. Cold and wind moved swiftly into the region. After shivering my way through Markoff’s Haunted Forest on October 22, it seemed like fall was finally (finally!) here.

With the cooler weather came the sudden and irresistible urge to look at fall leaves.
You jaded northerners out there may not get this, but for those of us who didn’t grow up with it, fall leaves are almost indescribably cool. 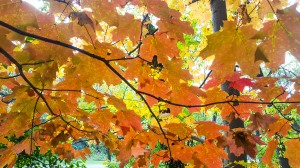 Sure, even in Gainesville there are a few trees that change color. But it’s nothing compared to waking up one day and suddenly being surrounded by red and orange and yellow and purple.

Here in the mid-Atlantic, you get to see first-hand as nature goes through this dramatic life and death cycle. And the leaves don’t go out with a gasp or a whimper. Their swan song happens in a burst of color as they put on this spectacular fall show.

It’s that memory of color that I hold on to during the winter. It’s what gets me through the dark, chilly months until the first leaves start to bud again in the spring.

And now, at last, DC was on the verge of its annual show.

I had a mission. The leaves are only at their best for a short period. I wanted to make sure I saw them and captured them on camera before they disappeared.

I didn’t have time this weekend for a big trip to the mountains so a local outing would have to do. Tentatively, I decided to take a few hours out of my Sunday to walk on one of my favorite trails and snap some photos.

The weather had other plans.

A few days ago, Capital Weather Gang broke the news that Sunday would be around 80 degrees. I don’t want to be the kind of jerk who looks a good-weather gift horse in the mouth, but 80 wasn’t what I had in mind for my fall leaf hike.

Just because I couldn’t have the exact fall experience I wanted didn’t mean my outing wouldn’t be worthwhile. I’d seen some vibrant red-leafed trees near my office. Certainly, there would be some good ones down in Rock Creek Park.

I charged my phone, laced up my shoes, and got ready to experience fall in the heat!

As I headed out toward Dumbarton Oaks Park, I felt optimistic. The water feature in that park is one of my favorites, and I was dreaming about all the cool “leaves on water” images would soon capture.

What I wasn’t anticipating was a return of all of the things I hate about hiking in the summer.

Even though it wasn’t sweltering summer hot, there was still that awful damp feeling of humidity in the air. Within the first mile, I could feel sweat gathering in all the places where no one should ever experience sweat. Gnats were drifting around my head and creeping way too close to my eyes and mouth. Even the mosquitoes had emerged from their cold-weather hibernation to bite every inch of exposed skin.

In the midst of all this hot nastiness was lots and lots of green. Green, green, and more green leaves. Some trees were trying halfheartedly to change from summer mode to fall, but they were few and far between.

As wonderful as it was getting out of my home and getting in touch with nature, it was hard not to feel disheartened as I walked. It was the day before Halloween. Where was fall?

I’m still not sure.

November starts in a few hours, and we have another stretch of 80-degree weather hitting us in the middle of the work week. Is 2016 going to be the year without a real fall?

I know in a couple of weeks the weather will become frigid. I’ll be gearing up for winter hiking and complaining about my bottom turning to ice. But right now, I’m ready for a stretch of beautiful autumn weather.