Sometimes I forget that most people are inherently good. It’s easy to forget in the city where it’s easier to slide into the every-man-for-himself mentality. And here’s the truth: I may recognize my neighbors, but I don’t wave to them; I sit next to the same people on the bus every day, but I don’t talk to them; and I see the same surprisingly well put together homeless woman on the corner every time I walk up to Columbia Heights, but I don’t know her and I don’t help her. It’s cold here in the big city, and if I think too much about it, I start to miss the easy warmth of the people in my hometown in North Florida.

On the trail, for some reason, it’s different. We tend to hike close enough to D.C. that unless someone has an accent, I usually assume they’re also day tripping from the city or its suburbs, but out in nature all of that city coldness seems to go away.

Sireen and I conquering Old Rag.

It’s like we all form an unspoken temporary pact when we’re out on the trail. Each and every one of us woke up in the morning and went, “I’m going to climb a mountain today,” or “I’m going to go on a disturbingly long walk somewhere.” We don’t know each other, but when I see these strangers out on the trail (unless they’re extremely annoying), I want them to succeed. I want them to feel as awesome as I feel. I want to be able to help if they’re struggling. I want to open my first aid kit and pass out my emergency meds. If only for a few hours, I want to be their trail friend.

Recently, my friend Sireen and I went out to Old Rag. This is the one hike you have to accomplish if you want anyone in this region to take you seriously as a hiker, and I’ll be real, Sireen and I would really like some hiking street cred. I’ll give my full thoughts on the actual hike in a later post. But my real takeaway, beyond the awesomeness of the hike, is how much we lucked out with our temporary trail friends.

If you’ve never been to Old Rag, the rock scramble at the top is a challenge. There’s a lot of it, and you keep thinking it’s over and then more scramble appears out of nowhere. I’m relatively new to this scrambling business, and despite researching the hike in advance, I wasn’t mentally prepared to approach the first challenge—a giant, narrow crevice in the rock. I looked at this crevice and just thought, “Nope, not doing it.”

While I stared into the rock with mounting hopelessness, I watched as one adventurous gentleman precariously lowered himself into the crevice by gripping the sides of the rock and carefully negotiating himself down using his arm strength. After he reached the bottom, another member of his party handed his crying son to him. It was awful, the boy was terrified. I cheered for the kid when he got into the crevice – anything to make the little guy feel better. But inside, I felt like that little boy. I wanted to sit down and do some messy crying too.

Here’s an unfortunate fact about me, I’m not very trusting. I’m a permanent smiler, so people usually think I’m very friendly and approachable. Behind the smiling face, I’m kind of reserved. I have a hard time trusting people I don’t know, I don’t like approaching people I haven’t met in a controlled setting, and I don’t like talking to strangers.

I had to talk to some strangers. There was no other choice. The options were to talk to strangers or turn back, because we didn’t know how to do this alone. Luckily, an awesome girl and her guy friend were right behind us on the trail. The girl and I had matching Osprey bags, so I knew she was wise. Her guy friend made us take a closer look at a narrow opening in the rocks that I’d earlier ruled out as a possible entrance into the crevice. He took off his pack, shimmied his way through and then turned around to help us. We handed him our packs, and then he helped guide each of through the narrow opening. It was amazing. If it wasn’t for that small moment of kindness, I don’t know…maybe we would have still made it down. Maybe we would have turned around. Who knows? But they definitely got us back on the right track faster. 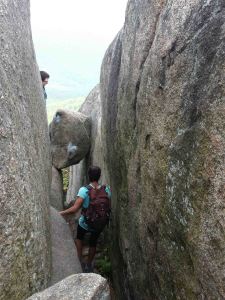 One of our trail friends leads the way through a tricky part of Old Rag.

There was a core group of about 10-15 people who were all hiking at the same pace as us. As we puzzled over which steps to take, it became normal to ask the others which way to go when the trail seemed unclear and to check with them on where we should put our feet and/or hands on the next boulder. I offered my hand to help strangers up. At one point, a nice older woman even tried to give Sireen a boost by pushing up on her bottom (in the nicest way, of course!). And the kindness continued after the hard part was over. When we made it to the composting toilet by the Byrd’s Nest shelter, without any prompting, a young woman offered me one of her biodegradable wipes.

The kindness even made it off the trail as we prepared to go back to the real world.

We spent six hours hiking. Six hours. That’s a long time. We were tired and more than ready for some celebratory post-hike BBQ. We were all set and ready to take off, but when Sireen went to turn the car on, it made this weird clicking noise and refused to start.

For reasons that I don’t understand, Shenandoah is in the middle of a cellphone service-free zone. We’re talking zero service—nada, zip, zilch—when we’re in the park. Normally, it doesn’t matter and is a nice break from technology, but we just found ourselves neck deep in a car crises without the use of cell phones.

It was 5:00 pm and the Old Rag ranger station was already closed for the evening. Thankfully, after a previous crisis earlier in the summer, I knew that there would be an emergency phone on the side of the ranger station. Sireen hopped on the phone and an awesome guy at the Shenandoah emergency center tried to connect her with local car places, but it was a holiday weekend, and none of them were willing to send someone out to help us.

I walked back to try her car again, but it was still stubbornly refusing to do anything except terrify me with the clicking. Out of options, I squashed my fear of strangers and asked a nice young couple who just returned to their car if they had jumper cables.

The guilt was real. I knew how tired they were, I was personally feeling the same post-hike exhaustion, and I hated to drag them away from starting their travel home. But the couple was super nice and agreed to meet me back by Sireen’s car. The guy knew things about cars, which was more than I could say for either of us. He tried to jump the car twice, but it was no good.

We thanked the couple sincerely and, out of options, went back to the emergency phone to see if the nice Shenandoah emergency people could connect Sireen to her brother.

It was at this point that I sat on the ground to be dejected and pathetic. It was a good look for me. Suddenly, two cars full of people drove up. This is my memory of the exchange:

Awesome-Dude-Who-is-About-to-Save-Us, “Hey, do you need help?”

Awesome Dude, “What kind of car is it and what’s happening?”

Me, “It’s a Range Rover and it’s doing this weird clicking thing and not starting.”

Awesome Dude, “The battery is dead. I’ll jump it for you.”

Me, “We totally did that and it didn’t work.”

Awesome Dude, “No. I work with cars for a living. The battery is dead, and I can fix it. Hop in.”

I swear at that moment, as I swallowed all of my stranger danger fears and hopped into that car, I could almost hear that symphony hallelujah music that plays in the movies. It took less than 10 minutes. Awesome Dude hooked the jumper cables up, I turned on the car, and it just started. It was magic and then he was gone—I didn’t even really properly thank him before his caravan was on its way home. It was a huge shame because he deserved more than just a small thank you and my appreciation. Awesome Dude lived up to his name. Awesome Dude saved us.

During all of this excitement, Sireen stayed back at the emergency phone trying to connect with her brother. Since she couldn’t see her car from the ranger station, I had no choice but to drive it up to her (under no circumstances could we turn off this car until it was back in the cell service zone). This is a big deal, since I don’t like to drive, almost never drive, and certain people in my life think I can’t drive. It felt dramatic, like I was riding up on a shining white stallion to save the day or something. But that moment of realizing that we would get back home after a grueling day on the trails? Priceless.

Thank you, strangers. I don’t know any of your names and pretty soon, I’ll forget your faces, but I’m not going to forget your awesome good deeds.