When I was at Brandeis, I was part the group that put on major concerts. By the time I got to my senior year, I was an old hand at the process of taking pieces of staging apart, wheeling equipment boxes onto the freight elevator, and helping the roadies load everything onto the truck.

What I do remember is that during loadout, I somehow ended up stationed at the loading dock. That frigid New England air started to creep up on me. As the hours ticked away, the cold seeped deeper and deeper into my bones.

Putting up, running, and taking down a concert was always next-level exhausting. It was 36 hours of non-stop, bone-breaking labor. After so many hours of packing, lifting, and working, my body wasn’t functioning right anymore. And I guess, it just stopped trying to keep itself warm.

By the time we were done, I was colder then I think I’d ever been before. I drove home, and I remember walking into my room and being completely numb.

Maybe it was instinct or maybe I’d finally learned something about the cold after almost four years in Massachusetts, but I knew that I needed to get into warm water.

I turned on the tap, crawled into the shower, and when the feeling came back, the pain that came with it was unbearable. So many years later, and most of my memories from that night are just a foggy haze, but I still remember that moment. I can still feel that pain.

That wasn’t the coldest day I spent in Massachusetts. Not by a long shot. But when people ask me about what it was like being a Floridian in New England, that’s the memory that always comes to mind: a cold that feels like it will never leave my body, like it will never go away.

Living in DC, that memory usually feels very far away. But, starting on Christmas Day, the mid-Atlantic fell under a multi-week assault from an Arctic blast. Instead of our normal one or two epic cold days, we faced a sustained assault of bitingly cold weather that seemed like it would never end.

All year round, I try to get out and walk. And honestly, I find that it’s easier to rack up miles during the winter. As long as I’m dressed properly, 15 miles in 30+ degree weather is way easier to accomplish than 10 miles in 90+ degree weather.

But even my positive cold-weather-walking attitude can’t stand up to temperatures less than 20 degrees.

The obvious solution would be to just stay indoors if it’s too cold, but as I faced the final days of 2017, I got it into my head that I needed to do a “First Day Hike.” And as we got closer and closer to New Year’s Eve, I was sure that the only way I could start 2018 on the right foot would be by doing a hike on New Year’s Day.

The local Sierra Club sponsors a yearly First Day Hike event. This year, it was scheduled to start at 10:00 am on the C&O Canal trail, which was a little too early-morning ambitious for me. So, Sireen and I planned to do our own version of the C&O Canal hike a little later in the day.

Then, the Arctic blast hit our region, and I thought that was the end of our plans.

Capital Weather Gang was forecasting a high between 19 and 24 degrees with gusty winds. The last thing I wanted to do was hang out in that kind of weather.

Sireen and I messaged back and forth about whether or not we should still hike. I think we were playing chicken with each other, and for some reason, neither of us backed down.

If she wasn’t going to drop out, then I felt like I couldn’t drop out. Although, I suspect that both of us were waiting for the other to say, “No. Nope. Not going to happen.”

I went to bed at 3:00 am that night sure that I was going to message her to call it off.

The next morning, as I was filling my coffee urn and strapping on my pack, I still sort of thought that I was going to turn around and go back to sleep.

But I didn’t turn back. I headed out the door and into the eerie quiet of DC on New Year’s Day.

As I walked the mile and a half to our meeting point, I was struck by how few people and cars were on the street. The combination of the cold and a city-wide hangover had left a hush over Georgetown that’s normally reserved for the dead of night.

Sireen and I linked up on M Street. And, even though we planned it, I think we were slightly surprised that we’d both made it to the spot as promised.

After 20 minutes of walking to get to M Street, I was pretty comfortable. I was equipped with knee-high athletic socks, lined exercise tights, base shirts, 3-in-1 jacket, gloves, buff, headband, and hoodie. There were so many layers that I felt a little like the Stay Puft Marshmallow Man.

Sireen still needed to get warm, so after a brief “hello,” we headed out to the canal to start walking.

For the first mile, it was quiet. On a typical weekend, the C&O Canal is filled with walkers, runners, and bikers. We weren’t alone, but it was a fraction of the people that would usually share the trail with us.

At mile 2.5, we started to see some of the Sierra Club hikers as they made their return to Georgetown. It was nice seeing so many other happy, cold hikers, many of whom were quick to wish us a happy New Year.

Our goal was to make it to the 4-mile marker. And the longer we hiked, the more eager we were to reach our turnaround point. I’d done this part of the canal enough that I knew we were getting close to it. There were still groups of Sierra Club hikers passing us, and I had this idea that we could try to catch up to them when we turned around.

I spotted the marker on the other side of a pedestrian bridge, but I also saw something

strange in the distance.

And as if waking up from a cold-induced daydream, Sireen responded, “Huh? Oh! Mile marker!”

“No. That!” I pointed up ahead to a far-off spot on the canal because I couldn’t believe what I was seeing.

“Yes, those are people.”

Frozen and more than a little confused, we walked past the 4-mile marker post. Up ahead, there were at least 50 people spread out on the ice – skating, playing hockey, and doing all the strange things that northern people do when it gets crazy cold.

We were impressed so many people owned their own skates and knew about this secret canal ice skating thing.

We were also concerned.

Sireen and I are both from very warm places. And I suspect that hailing from regions where the water never freezes, gives you a healthy fear of weird things like frozen lakes, streams, and canals. And our worry wasn’t unfounded, during our walk, we’d noticed plenty of unfrozen parts of the canal.

As we watched the crowds of fearless people skating in circles, I kept thinking that we were going to see someone crash through the ice. I was ready to pull out my phone and dial 911 just in case. 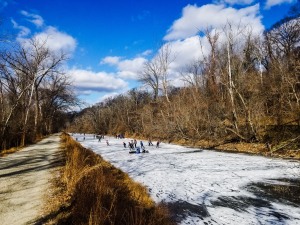 But no one fell through. We watched for a little while until the ever-present cold started pushing us to move or freeze where we were standing.

By the time we started walking again, the Sierra Club members were long gone.

We also both discovered an unfortunate side effect of the cold: our water bladders were completely frozen. We were very thirsty and unable to get a drop of water to pass through our hoses. Thankfully, we only had to struggle with our thirst for about one more hour of walking.

The last mile was the hardest. The walk itself wasn’t difficult, my legs barely felt fatigued. It’s just that the cumulative effect of all the cold was starting to catch up with me, and I was also getting ridiculously hungry and thirsty.

After a very long hour, we finally made our way up from the canal and back to an unusually quiet M Street.

All I wanted at this point was a bowl of chili and a sandwich. I don’t think anything else would have made me happy.

We ended up going to J. Paul’s, which is a restaurant I typically don’t pay any attention to, but it was the perfect choice for this cold day.

Once we were inside, I couldn’t get warm. The waitress brought us tea and we tried to use the mugs to warm up our frozen hands. Every tentative press of my fingers against the ceramic was painful. The feeling slowly crept back into my fingers, but it wasn’t enough.

We got our chili and split a chicken sandwich and fries. But that wasn’t enough to warm me either.

Nothing was fixing me. I still felt like ice water was pumping through my veins.

It made me think of that night almost a decade ago in Massachusetts. I had flashbacks of sitting under that spray of hot water and feeling cold beyond what I’d ever imagined. Was I colder then I was that night? Was that even possible?

The smart thing would have been to go straight home and submerge my body in warm water. If it worked once, there’s no reason why it wouldn’t work again. But, that’s not the route I took.

I was already in Georgetown, and I really wanted to see The Last Jedi before I accidentally spoiled myself. So, clad head to toe in hiking gear, I parted ways with Sireen and went to the AMC Loews Georgetown.

I assumed that once I was indoors in a theater far, far away from the Arctic air that I would be fine. I wasn’t. For the first hour and a half of the movie, I was freezing. My 3-in-1 jacket was zipped all the way up. My hands were in my pockets. I was cold, and it was all I could do to stop from pulling up my hood.

I also had to struggle with a second unforeseen side effect: exhaustion. My body had a tough day. Not only had it worked hard walking the canal, it also had to help me stay warm enough to avoid hypothermia. Once I was indoors, I guess, it was tired of doing so much work. It’s a good thing I was fully committed to watching the movie or I would have passed out in the theater.

But even while I followed the adventures of Rey, Finn, and Poe, I kept thinking about that night in Massachusetts. Was this the coldest I’d been since I left that frigid state?

But this may have been the most sustained time that I’d spend in sub-25-degree weather since my Northeast days. And, lucky for me, I somehow survived my two-and-a-half-hour New Year’s Day outing in the crazy cold. I don’t know if this means I’ll have a good year or not. But I do hope that it will at least be a better one than 2017.