Five days trapped inside due to Snowzilla. Two snow days off work. One day of jury duty. All of this strange, indoor, boring time left me claustrophobic and tense. So when Tippa messaged me on Wednesday to ask, “When are we hiking again?” My response was, “Now.”

Of course, “now” wasn’t actually possible. It was still the middle of the week, and we had a few more work days standing between us and Saturday. For me, that also meant being a responsible citizen and heading to the DC Courthouse for jury duty. Thankfully, I thought ahead and brought 60 Hikes within 60 Miles: Washington, DC (this is an affiliate link, learn more) with me to stave off the boredom and find inspiration for our next trip.

An awesome birthday gift from Sireen, 60 Hikes within 60 Miles: Washington, DC is filled with excellent options for hiking within the District and its immediate surroundings, including quite a few public transit accessible trails. It was published in 2007, which makes some of the information outdated. Good news, though, I heard from Renee Sklarew, a local writer, and she’s working on updating the book! According to her website, the third edition is scheduled for release in 2017 – I can’t wait to check it out. 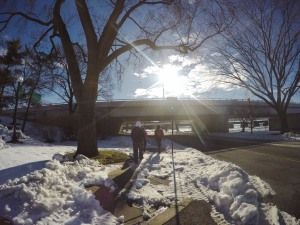 While we’ve had some higher than average temperatures this week, snow is still all over the place. We’re mid-Atlantic residents who are not prepared for trekking in the white stuff, so we needed to stick with paved trails for our urban hike. After paging through the book, I selected a route starting at the Smithsonian Metro Station (Mall entrance side), going past the Jefferson Memorial, around Hains Point, and into Southwest DC.

Hains Point is an artificial island created in the 1880s from material dredged from the Potomac and bears the name of US Army Major General Peter Conover Hains, the man who designed the Tidal Basin. The iconic land many of us recognize as the setting for some of DC’s most famous monuments, including the Lincoln, Jefferson, and MLK memorials, didn’t always exist. Stretching over this space was a shallow wetland called the Potomac Flats. By the late 1800s, the wetlands were filled with refuse and sewage from the city. The dredging project helped mitigate the threat of floods and solved the health crisis caused by the trapped sewage. It also created 628 new acres of land, much of which makes up the National Mall that we’re familiar with today.

Before this outing, I’d never stepped foot on Hains Point. I knew it was home to the East Potomac Park Golf Course, a public course that also has one of the oldest miniature golf courses in the nation, and that it was the original site of The Awakening sculpture, but this was the first time I had an interest in visiting it.

The National Mall is always under construction.

We planned to meet at the Smithsonian metro station at 8:00 am. Unfortunately, my crew for the day (Sireen, Tippa, and Ted) was held up. Sireen made it to the National Mall, but with it under construction – again – she had difficulties navigating from her parking spot to where I was waiting at the metro station. Tippa and Ted were foiled by metro problems on the red line. Sireen and I were able to link up at 8:15 am, and with the other two members of our crew operating on an ETA unknown, we made the executive decision that it was way too cold to stand still and walked toward the Washington Monument.

This may make me sound like a tourist, but even after five and a half years in DC, I never get tired of seeing the monuments. I may not care for the crowds of tourists who fill up our streets in the spring, summer, and fall, but whenever I get a glimpse of the Washington Monument from afar or walk onto the Mall and catch sight of the Capitol, my breath catches and I feel the promise of America.

As much as I joke about our tourists, I love that their presence means you can take a million photos of the Monument without any judgment. It doesn’t matter if it’s your first time seeing it or your thousandth. On a clear morning, when it looks like it’s been painted onto the sky, the Washington Monument is always photo worthy.

The Washington Monument up close.

Jefferson’s view of the White House and the Washington Monument.

The Tidal Basin and Washington Monument in winter.

From the Washington Monument, we continued to the Jefferson Memorial. Due to the chilly weather and the time of day, our route was practically empty. We arrived at the Memorial and decided to climb up the marble steps to hang out with our third president.

There is something magical about being in a normally busy location when it’s deserted. Over 2.5 million people visit the Jefferson Memorial each year. In the height of cherry blossom season and the summer, thousands of visitors from around the world spend time with Jefferson’s statue. On this morning, it was just me, Sireen, a solitary jogger, and Thomas Jefferson. We took a few moments to sit in front of the President, enjoying the rare opportunity to quietly appreciate his constant vigil over the White House and the Washington Monument. 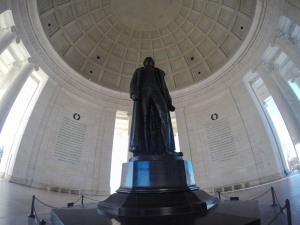 President Jefferson looking out over the city.

As we finished at the Jefferson Memorial, Tippa and Ted finally caught up to us. Together, we headed around Ohio Drive to Hains Point. The sidewalks around Hains Point were unplowed, but the road was closed to cars for the day, so we were able to safely walk in the middle of the street.

The left side of the path was lined with leafless cherry trees that I imagine must be stunning in the spring. Through the trees, we could see the golf course, which was closed and covered in untouched snow. On the right side of the path was a clear view of Reagan National Airport. This would be a fun viewing sight for anyone who enjoys watching planes and wants a break from the main plane watching location, Gravelly Point.

The morning was serene and, just like the Mall, Hains Point was practically abandoned. As we approached the turning point for our loop, we came across an empty playground. Although we are respectable adults, Sireen and Tippa immediately went running for the playset. Ted and I followed at a more sedate pace, carefully breaking through the icy snow, which was somehow still untouched nearly a week after the snowstorm.

After the playground, we conquered some of the nearby snowbank mountains, managing to work some climbing into an otherwise sedate outing.

King and queen of the snowbank.

Standing tall on a snowbank.

Pretending to be kids again.

Walking toward the National Mall, we were treated to excellent views to our right of Fort Lesley J. McNair, the National War College, Bolling Air Force Base, and Southwest DC. On the left side were more cherry trees, the golf course, and, as we approached the Tidal Basin, the mini-golf course.

Because of time constraints, we cut out the additional few miles in Southwest DC and headed back toward the base of the Washington Monument. The total route was a little over six miles.

No outing with friends is complete without some kind of celebratory post-exercise eating. After we completed our trek, we loaded into Sireen’s car and drove to 14th Street for delicious sandwiches at G.

Solitude – 4 (This outing was probably misleading. I imagine it’s really busy in the warmer months)

This hike is far from the most enjoyable in the area. However, for what we needed – an outdoors activity that wasn’t heavily impacted by the lingering snowpack – it was perfect. The loop around Hains Point was a little boring, and I doubt I would do it again in winter. Given the sheer number of cherry trees lining the route, I do think it will be a great, slightly less tourist-clogged option during cherry blossom season.